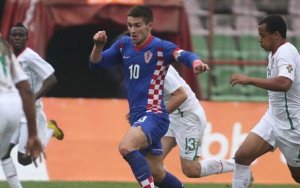 Finding wonderkids is one of the most popular aspects of any football management simulation game, and this year’s edition of Football Manager 2011 is packed full of them.

Everyone wants to play ” the Arsene Wenger role” by buying on the cheap and training someone up into a first team starter and someone that will win you so many points.

The Football Manager research team is ever-expanding, and huge amounts of people contribute to make what seems to be the best football management game on the planet.

The days of Championship Manager and LMA Manager have long past as the unrivalled Football Manager game takes to the stage.

If you’re looking for a free transfer on a low budget, look no further than Marko Livaja.

Livaja is a Croatian free agent on most versions of the game, which means he will cost absolutely nothing.

The 16-year-old is willing to step down into League One and has fairly low wage demands.

The only hinderance is that Marko Livaja is serving a global ban which means he cannot play until 01.06.2011, which means a year without any development, but for a free transfer you can’t really complain?

If you’re looking for the next Gianluigi Buffon or Iker Casillas, you’ll find some top potential in Matej Delac.

The Chelsea goalkeeper develops into one of the best goalkeepers on the game and starts at only 17-years-old.

Sani Emmanuel is one of the best young strikers on the game and is available for absolutely free.

Emmanuel also has the potential to be as good as Wayne Rooney (apparently)!

Keep up to date with The Youth Radar for our next installment of Football Manager wonderkids and some more top finds to add to your squad!

I'm a 21-year-old Multimedia Journalism student at Bournemouth University aspiring to be one of Britain's top sports journalists. Follow me on Twitter, Facebook and LinkedIn for contact and further information.
View all posts by Tom Bennett »
« Algarve Tournament: England 2-2 Portugal
Sturridge Following in Wilshere’s Footsteps »