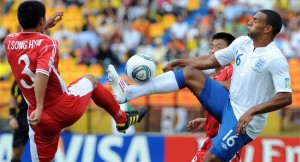 After this draw, England must now win against Argentina or Mexico to stand any chance of reaching the next stage.

England have dropped two points in their opening game of the FIFA Under 20 World Cup in Colombia, drawing 0-0 with Korea DPR.

Brian Eastick’s side looked the brightest for large periods of the game, creating the clearest chances and playing the better football. However, some brave defending and heroic goalkeeping from the underdogs made sure England couldn’t grab the much sought-after three points.

Matt Phillips and Billy Knott were at the centre of England’s chances in the opening period. Knott’s crosses created havoc in the Korean area but England couldn’t get enough on any of them to really test Om Jin Song in the Korean goal.

Jason Lowe won possession on the halfway line and a bold run finished in a pass to Phillips. He then found Knott and once again Knott was inches away from producing some magic.

Saido Berahino also began to cause trouble for the Koreans but found his shot find the side-netting.

Jang Song Hyok almost gifted England a 30th minute goal when his clearance was swiped behind for a corner, but honestly could have gone anywhere following Callum McNanaman’s cross.

Knott, Phillips and Berahino continued to cause problem after problem without reply against the Koreans so it was no surprise when Billy Knott had the best opportunity of the game. A deep cross found him at the back post but the Sunderland man and also the smallest player on the pitch was helpless and could only head into the side-netting.

In the second-half the Koreans looked better. Despite the fact it was mainly due to the sheer amount of numbers in their half of the field, they definitely became more resilient and limited the number of England chances. Korea were constantly looking to hit England on the break but such chance never arose.

England will play Argentina next before taking on Mexico in their final group game. After drawing with Korea, England must be looking for a win against a highly-fancied Argentina side.

I'm a 21-year-old Multimedia Journalism student at Bournemouth University aspiring to be one of Britain's top sports journalists. Follow me on Twitter, Facebook and LinkedIn for contact and further information.
View all posts by Tom Bennett »
« Eric Dier: England’s Next Big Thing
The Slow But Optimistic Rise of Palestinian Football »