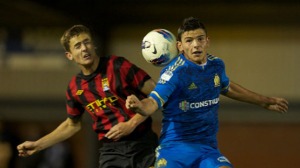 Manchester City and Marseille tussle for the ball together

Manchester City and Celtic have both crashed out the NextGen Series thanks to defeats against Marseille and Barcelona respectively.

Manchester City narrowly lost 2-1 to the French side whilst Celtic were completely humiliated by Barcelona, losing 5-1.

Celtic conceded two quick goals in the opening five minutes in their game at the Mini Estadi.

Firstly, Patrice picked up the ball on the edge of the box before pulling off a nice turn and chipping the ball past Robbie Thomson in the Celtic goal. The ball hit the crossbar but deflected down onto the line and bouncing into the net.

Dongou, now the tournament’s top scorer, capitalized on a defensive error from Celtic as he slid in to make it 2-0 only two minutes later.

Celtic attempted a physical approach to the game in order to breakdown Barcelona’s crisp passing presence.

Celtic managed to keep the deficit down to only two goals as half-time approached but came undone in the second-half.

Dongou netted his second and third before Sandro Ramirez made it five for Barcelona.

Watt netted a consolation goal for Celtic but it made no difference. Marseille would have to lose in order to give Celtic any chance of qualifying for the next stage. The two sides would face eachother in their final game.

In yesterday’s other game, Manchester City crashed out the competition finishing bottom of the group thanks to Marseille inflicting another defeat on the Blues.

Santiago’s powerful free-kick provided the assist to Marseille’s opener as Tom Halsall parried the ball into the path of the onrushing Thomas Savino who netted for the French side.

Jordy Hiwula scored the equaliser just before half-time as he headed into the roof of the net.

News of Celtic’s demise in Barcelona gave Marseille extra-incentive as they pushed forward for a winner.

Bonelli looked to take advantage of that Celtic result but missed a 79th minute penalty. Fortunately for him he pounced on the rebound and sent the Marseille fans into raptures as they got the winner.

I'm a 21-year-old Multimedia Journalism student at Bournemouth University aspiring to be one of Britain's top sports journalists. Follow me on Twitter, Facebook and LinkedIn for contact and further information.
View all posts by Tom Bennett »
« Spurs Finish Triumphant in Close Contest
England Beat Scots to Reclaim Victory Shield »

One thought on “British Sides Eliminated By Europe’s Elite”