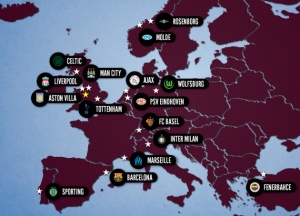 The NextGen Series group stage has almost passed and the quarter-final matches have been confirmed.

FC Basel and Inter Milan will contest the final game of the group stage, but this match will be irrelevant to any positioning within Group D.

Eight of Europe’s elite youth clubs will be contesting the second round which consists of two legs.

The first leg will be played at the ground of first position from the groups and the second leg being at the second placed team’s ground.

The dates and times of all games will be confirmed in the New Year but are expected to take place in mid-January.

(Games to be played in mid-January, dates and times to be confirmed in the New Year)

I'm a 21-year-old Multimedia Journalism student at Bournemouth University aspiring to be one of Britain's top sports journalists. Follow me on Twitter, Facebook and LinkedIn for contact and further information.
View all posts by Tom Bennett »
« Rising Talent: Mateo Kovacic
The Fall of AS Monaco »