The Youth Radar’s Review of the Transfer Window

This January transfer window has not lived up to the expectations of it’s previous kinds.

Andy Carroll and Fernando Torres grabbed the headlines on the final day last year with their multi-million pound moves to Liverpool and Chelsea respectively. But there was no activity of this sort this year.

However, there was some interesting moves involving a lot of young players who are looking for a fresh start or taking their career to the next level in a bid to fulfill the potential that has been widely speculated that they possess.

The Youth Radar takes you through all the top moves of the transfer window regarding these young players and what they can hope for with their new clubs.

The 20-year-old has been immediately loaned back to Genk

The Youth Radar covered Chelsea’s bid to sign the young Belgian with a profile-style article a few weeks ago. We revealed that de Bruyne was one of Andre Villas-Boas’ top transfer targets and AVB delivered his man in the late stages of the transfer window with a fee of just under £7 million.

However, we will not see de Bruyne in the Premier League this season as he has been immediately loaned back to Genk where he will spend the remainder of this term in order to gain further experience and help Genk towards the coveted Champions League spot they secured last season.

Juan Mata and Florent Malouda provide competition for de Bruyne at the moment at Stamford Bridge but Malouda’s rapidly aging years could see de Bruyne playing a huge role next season as AVB looks to rejuvenate his Chelsea side.

De Bruyne described the move as “a dream come true” and rightly so as he has waited for the past six months for a deal to be complete. The 20-year-old was widely expected to sign for the Blues in the summer but the deal never materialised and de Bruyne was left to stay hopeful for the January window.

The Youth Radar will provide updates of de Bruyne’s progress in Belgium and bring you the latest news regarding his future at Chelsea next season.

Ravel Morrison has been the subject of some controversy in the past few weeks regarding allegations that he was caught stealing from fellow United teammates in the changing rooms.

Sir Alex Ferguson’s reaction was to immediately get rid of the youngster on a permanent deal as opposed to the loan that was expected.

West Ham were first to snap up one of England’s hottest prospect and someone that was once widely regarded as the future of Manchester United.

The deal finally went through at around 8.30pm last night as Morrison passed a medical. Morrison’s wage will start at around £12,000 a week with a possible increase to as much as £65,000. The wage-rise clause will be triggered only if West Ham regain their Premier League status. Then, after a certain number of top-flight starts, his salary would rise incrementally towards the £65,000 ceiling.

Morrison’s contract was due to expire in the summer and therefore West Ham have snapped him up on the cheap. Morrison was considering a new deal from Manchester United at the time of the Hammers bid being accepted.

Hopefully his Championship form and bid to get West Ham United back into the Premier League will prove successful and The Youth Radar will have a lot more to report on him in the near future.

The 20-year-old has agreed a three year deal with the Trotters and is looking to make a huge impact on the Premier League and possibly on Fabio Capello.

Sordell has been a regular fixture in Stuart Pearce’s England Under 21 squad this season and will certainly be looking to make the step-up into the senior side.

He has netted ten goals this season for Watford and has totalled 27 since making his debut in 2009, impressive for such a young striker.

His performances have earned him admirers from all over the country and rumours say that there was a number of people knocking at his door for his signature.

Owen Coyle told BBC Sport “We know that he [Sordell] has great potential and I am really looking forward to working with him,” 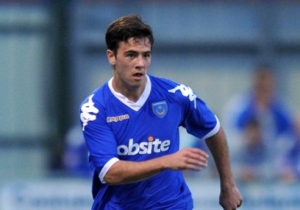 Ryan Williams has made 6 appearances for Pompey this season

Fulham have snapped up Australian Ryan Williams from Portsmouth.

This fairly-unknown figure has been a revelation at Portsmouth since making the step-up from the Academy side last year.

He is still only 18-years-old and the winger has a bright future ahead of him. He has made six appearances for Pompey so far this season and played in Fulham reserve’s 1-0 win against Wolves on Monday.

Both the fee and contract details have been undisclosed but we expect the fee to be around the £700k mark.

Despite Portsmouth’s reluctance to let Williams leave, they thought it would be in the best interest of the player to seek a move to the Premier League and hopefully fulfill his potential.

The transfer of Luke Freeman when he was 15-years-old to join Arsenal gained huge media attention.

Freeman was looked at as one of the biggest prospects around and there was huge competition for his signature from all around the country.

Since arriving at the Gunners however, Freeman has spent a lot of time in the reserves and has not really made any real impression on the first team. However, he is still only 19 and has a lot of time ahead of him to make an impact on English football.

Freeman has been on-loan at Broadhall Way since November and has made nine appearances for the promotion hopefuls. He has scored a handful of goals in a side that are really looking in form at the moment and are pushing towards the top of League One.

Thomas Eisfeld follows Rosicky and Lehmann to the Emirates from Dortmund

A transfer window just wouldn’t be the same without Arsene Wenger picking out a new prospect to introduce to the world and maintain Arsenal’s prestigious label as a school for footballers.

Thomas Eisfeld is as tall as Per Mertesacker and follows in the footsteps of Jens Lehmann and Tomas Rosicky who have made the steps over to England.

There’s much speculation that he will not do well in England from a number of media outlets and many drawing attention to the fact that Arsene Wenger is failing to sign any big names this season and is once again banking on his young stars making their way through the ranks.

Arsène Wenger told Arsenal’s Official club website: “Thomas is a player we have liked for some time. We’ve watched him closely this season, where he has excelled for Dortmund’s youth team.

“He is young but has proven to us that he can play, that he has the attitude and technical ability to be a valuable addition to our squad. We’re very pleased to welcome him to the Club and look forward to his contribution in the coming seasons.”

Stick with The Youth Radar for all the latest news regarding these players and there progression following these transfers.

I'm a 21-year-old Multimedia Journalism student at Bournemouth University aspiring to be one of Britain's top sports journalists. Follow me on Twitter, Facebook and LinkedIn for contact and further information.
View all posts by Tom Bennett »
« Milan and Marseille Progress to Semi Finals
NextGen Series Quarter Final: Spurs 1-0 Liverpool »