Peacock Names Under 17 Squad for Elite Round 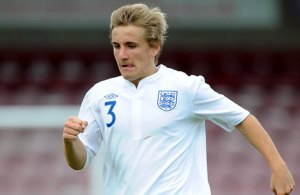 John Peacock has named his squad that will travel to Georgia to take part in the European under 17 Championship Elite Qualifying Round.

The mini-tournament kicks off on 26th March where England will face Georgia, Ukraine and Spain in a bid to reach the final tournament in Slovenia in the summer.

England came top of their initial qualifying group and won the Algarve Tournament in February, giving them a huge boost in confidence heading into the Elite Round.

Georgia and Slovenia are must-win games for England whilst the challenge of Spain looks to be their hardest test.

John Peacock has selected Chuba Apkom, Jack Jebb, George Willis and Luke Shaw following their injuries which kept them out of the Algarve Tournament.

Peacock told thefa.com “It’s a hard job to pick 18 players for the squad, but that’s the sort of problem that I want to have,”

“We’ve got a real depth in this age group and that’s something which we’d like to have in all the year groups. We know that the original squad picked isn’t always the one which eventually travels for various reasons so that depth is important and the door is never closed on any players.”

England play Ukraine in their first game on 26th March and you can follow their journey through the Elite Round on The Youth Radar throughout the end of the month.

I'm a 21-year-old Multimedia Journalism student at Bournemouth University aspiring to be one of Britain's top sports journalists. Follow me on Twitter, Facebook and LinkedIn for contact and further information.
View all posts by Tom Bennett »
« This Summer’s Youth Football Diary
Match Report: England Under 18s 3-0 Poland Under 18s »

One thought on “Peacock Names Under 17 Squad for Elite Round”