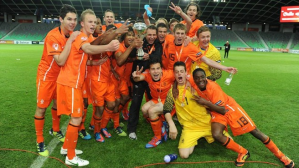 Netherlands won back their crown of the European Under 17 Championship holders as they beat Germany on penalties following a 1-1 draw in Slovenia.

Elton Acolatse found a late equaliser for Netherlands to cancel out a strike from Leon Goretzka to send the tie into the shootout where Oranje triumphed 5-4.

The match saw a strong crowd of 11,674 turn up in Ljublijana – the third highest attendance for an Under 17 final behind 2004 and 2009, but the highest ever for a game not involving the hosts. It was fair to say though that these two sides have really dominated the tournament.

Said Benkarit hit the post in the early stages of the game as he rifled an effort against the crossbar from far out.

Pascal Itter came close for Oranje when he touched Rai Vloet’s through ball just against the side netting before half-time.

Queensy Menig had an effort minutes later that came off the underside of the bar and was eventually cleared when he was fed through by Tonny Trinidade de Vilhena.

It was from Marc Stendera’s corner that Germany gained the lead when Goretzka jumped highest to head home.

Stendera and Nico Brandenberger both had chances throughout the second half to extend Germany’s lead as all hope for Netherlands slowly started to fade out.

It took until injury time for Netherlands to strike when Thom Haye’s corner found Branco van den Boomen who flicked it on to Acolatse to snatch the equaliser with a neat volley.

Stendera missed the decisive penalty and Oranje were crowned champions for  a second consecutive year.

I'm a 21-year-old Multimedia Journalism student at Bournemouth University aspiring to be one of Britain's top sports journalists. Follow me on Twitter, Facebook and LinkedIn for contact and further information.
View all posts by Tom Bennett »
« Rising Talent: Nick Powell
Feature: The Dutch Pipeline »