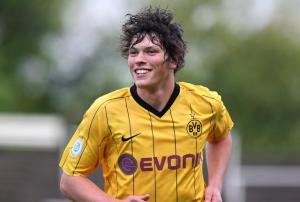 West Ham are looking into the possibility of bringing Germany Under 21 star Daniel Ginczek to Upton Park.

Sam Allardyce sent scouts to watch the Dortmund striker, currently on loan at St Pauli, on Friday night as they beat Regensburg 3-2.

Despite being sent off, West Ham told Hamburg’s local paper that Ginczek was terrific.

The 21-year-old took his tally to 12 goals with a single effort during the match.

Dortmund are rumoured to be wanting to sell Ginczek during the summer window and West Ham may look at him as a replacement for Liverpool’s Andy Carroll.