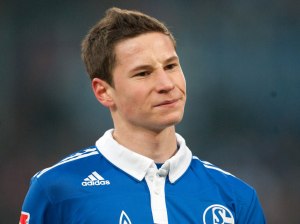 Draxler is under contract for another three years at the German giants.

Schalke think Julian Draxler is key to their ambitions next season and will fend off interest from Manchester United and Chelsea, according to Sky Sports.

Manager Horst Heldt thinks that his club’s UEFA Champions League qualification could prove decisive to Draxler’s future at the club.

“Julian Draxler is under contract at our club and he is an important player,” Heldt told BILD.

“We want to keep him at our club for as long as possible. It’s our obligation to ensure he feels fine being with us.”

Draxler has been a huge boost in Schalke’s run to the Champions League last 16 and the 19-year-old is also rumoured to be wanted by AC Milan and Inter.

“From our point of view, it would be helpful to win a berth in the UEFA Champions League for next season. This would be a boost!” Heldt said.

The midfielder is a regular at Schalke and could come at a big price. He made his debut as the second youngest ever player to start a Bundesliga fixture and it seems hasn’t looked back since.

I'm a 21-year-old Multimedia Journalism student at Bournemouth University aspiring to be one of Britain's top sports journalists. Follow me on Twitter, Facebook and LinkedIn for contact and further information.
View all posts by Tom Bennett »
« Nigeria Start Defence Of Title With Mali Defeat
VIDEO: Tottenham and England U21 Star Scores Belter In Training »