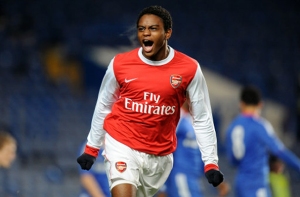 Kyle Ebecilio has completed a move from Arsenal to FC Twente.

It is no secret that Ebecilio has wanted to return to Holland and three years after joining the Gunners from Feyenoord’s academy, he has eventually got his wishes.

After being linked with Fulham and Swansea, he preferred a move to FC Twente of the Eredivisie and said: “I directly had the right feeling with FC Twente and felt at ease.

“I want to play as much as possible, gain experience and become better.

“Therefore I have to work hard and show what I am capable of.”

The 19-year-old has a bright future ahead of him and will be left to flourish in Holland, of which he says: “[At Twente] I will work hard and show what I can do.”

I'm a 21-year-old Multimedia Journalism student at Bournemouth University aspiring to be one of Britain's top sports journalists. Follow me on Twitter, Facebook and LinkedIn for contact and further information.
View all posts by Tom Bennett »
« England U19 Squad Named Ahead Of Elite Qualifying Round
Arsenal’s Thomas Eisfeld Scores Scorcher Against Liverpool »