Junioren Bundesliga U19: Wolfsburg, Leverkusen and Hoffenheim On Top 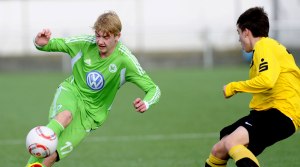 Julian Brandt netted for Wolfsburg at the weekend after Federico Palacios Martinez hit a hat-trick.

Wolfsburg continued their perfect record this weekend with a win away from home at Hamburg.

The result sees them five points clear of second-place Hertha Berlin at this early stage of the season going into the international break.

This week they won 4-1 thanks to a single effort from Julian Brandt and a stunning hat-trick from league topscorer Federico Palacios Martinez.

Dominik Masek scored the consolation goal for Hamburg but it wasn’t enough to overcome the strength of last season’s overall champions.

“Sure we have dominated the opponent but after the change I was not happy because the team was acting with too little order and unclean but of course this did not change the clear and deserved success. now we have 14 days off. This will be good for us to gather new strength.”

Bayer Leverkusen remain top of the division after seven games but succumbed to a third consecutive draw against Wuppertaler.

“Especially in the first half we did not play badly, the team has shown a good response to the Youth League game. But ultimately us the punch was missing.” said coach Nils Drube, who was without hot striker Marc Brasnic for this weekend’s fixture.

Leverkusen will be expected to return to winning ways in a fortnight’s time when they take on bottom of the table Theesen. Theesen are the whipping boys of the division, having lost six out of seven games, conceding 32 goals in the process while only netting three.

Hoffenheim are the new leaders in the South/SouthWest division after they overtook 1860 Munich on goal difference following a 3-1 win against Kaiserlautern.

Baris Atik put Hoffenheim in front before Waaris Rehman Bhatti equalised for the 10th-placed side.

Hoffeheim coach Julian Nagelsmann said: “We improved in the second half and generally felt very dominant.

“We made Kaiserslautern tired and didn’t put ourselves at risk.”

I'm a 21-year-old Multimedia Journalism student at Bournemouth University aspiring to be one of Britain's top sports journalists. Follow me on Twitter, Facebook and LinkedIn for contact and further information.
View all posts by Tom Bennett »
« Barclays U18 Premier League: Honours Even In Manchester Derby
Championnat National U19: PSG Remain Top In Group A »